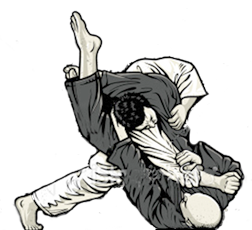 This class is open to the public as well as registered Karate students.

Learn and apply basic concepts that will assist you in your defense on the ground and gain experience rolling with your peers.

This art specializes in ground fighting techniques: navigating into positions of control with the fight-ending with either your escape, or forcing the opponent to surrender with submission holds like leg locks, arms locks, chokes and everything in between. The surrender of an opponent is usually expressed by a tapping motion (“tap-out”). Grappling is an umbrella term for martial arts/hand-to-hand combat.

Grappling Skills and Self Defense