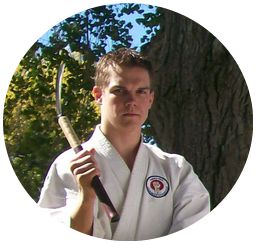 Shihan Alex was born in Salt Lake City, UT. in 1988. When he was two years old he moved with his family to Congress, AZ. He was a healthy and active child with an uncanny athletic ability even at an early age. At the age of seven he began his training under Sensei Drake Sass of Wickenburg, AZ. Shihan Alex proved to be an astute and promising student. His eagerness to learn, and his ability to comprehend and perform quickly made it a challenge for his instructors to keep him from getting bored. To their credit, he was always required to fulfill his time requirements for time on the floor, and never promoted early. During his Kyu ranks through Jr. Black Belt, Alex dedicated enormous amounts of his time and energy to the other students in his dojo. From this early age Shihan Alex was determined to have his own Shinpu-Ren Dojo someday.

In 1998 the Morris family opened their first dojo. Shihan Alex and his father together had already been teaching in the Morningstar schools. His father Hanshi Gary wanted to bring this valuable training to their small town, where there was very little available for the local kids. Shihan Alex in addition to his own training spent twelve hours a week teaching in the family dojo. At the age of eleven Alex was promoted to the rank of Jr. Black Belt by Sensei Drake Sass. The Shinpu-Ren system does not recognize a student as a full black belt until the age of sixteen. Shinpu-Ren does however allow the Jr. Black belts to progress in their Dan rank, which is also recognized at the age of sixteen. Shihan Alex received that honor when Hanshi John Kraemer personally promoted him to his third Dan rank at sixteen years of age. Alex has always held the highest regard for Hanshi John personally, and because of his tremendous dedication to Shinpu-Ren and his students..

Alex graduated from Prescott high school in 2006. Since then Alex and his family have operated two schools in the Prescott and Prescott Valley area. Alex Co-owns Ronin Handiworx LLC and teaches daily in the Shinpu-Ren Family Karate School in Prescott Valley Arizona. For Alex this is one more step to attaining his dreams. He has taught for the Yavapai Indian Tribe, Yavapai College, Prescott Valley Parks and Recreation, Basis of Prescott and Private Self Defense Seminars across the State of Arizona.

Shihan Alex has competed on the USA, USAMA, USKA, JKA, WKF, ASKA, and MARS tournament circuits since he began his martial arts career. He earned his first world champion title at the age of 10, from there he went on to win nineteen more World titles. Shihan Alex holds numerous national, regional, state and local titles as well as grand champions. In December 2014 Shihan Alex was inducted into the USA Martial Arts Hall of Fame with a Lifetime Achievement Award. He was again awarded by the USA Martial Arts Hall of Fame in 2015 as the Leading Male Karate Master of the Year.

In 2017 Alex professionally began teaching Yoga. This has long been a passion of his. Yoga is the perfect compliment to his Martial Arts training. In 2018 Alex earned his Satya Yoga Instructor Certification. In 2019 he opened classes inside the Dojo studio and teaches Vinyasa Flow as well as Hatha Foundations every week.

"I have wanted my own school all my life, and now I have the opportunity to build that dream. Watching all the changes and challenges that every student goes through is really what makes it all worth while. Some students really inspire me with their dedication to practice and helping others, some of the students especially the one's who are struggling, when they put out that never say die attitude and keep trying something, like a difficult kick, and they fall on their tail over and over again trying to get it right , I love that. It makes me really happy to see the camaraderie and friendships that develop between people who might never have even considered being friends before they started training. To see the acceptance between people, it's great".

Students are inspired by Shihan Alex, his skill and his knowledge, his ability to push them or make them push themselves to a higher level. Shihan Alex is inspired by his students by their sheer enthusiasm and dedication to karate.