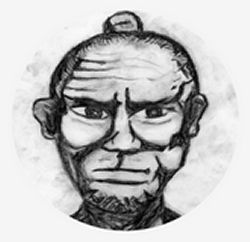 Sokon (Bushi) Matsumura was born into a well known Shizoku family at Yamagawa Village, Shuri. As a small child he lived with, Kanga (Tode) Sakugawa, 1733-1815, The “Father of Okinawas Karate.” Matsumura grew into a good scholar and noted calligrapher and like many youths from an early age studied the basics of “Te.”

When he was older he worked as a body guard for the last three Ryu Kyuan Kings, (Shoko, ShoIku, ShoTai). While working as a body guard he twice visited Fuchou and Satsuma as an envoy on affairs of state. At Fuchou he visited several Chinese boxing schools, and was able to study under the military attaches, Anson and Iwah. He also took time to visit the Fukien Shaolin Temple.

While at Satsuma Matsumura was initiated into the Jigen-Ryu sword fighting system.

Matsumura combined Okinawan “Te” and Chinese ChaunFa into an organized system. He called this system Shuri te, all Shorin styles originated with this man. After his retirement, Matsumura taught karate in an open area in Sakiyama Village, Shuri.